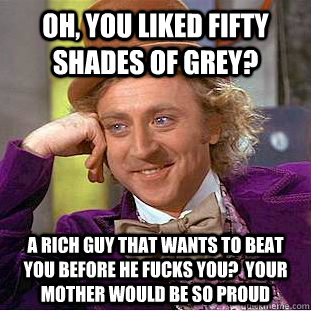 Please correct me if I’m missing something. We’ve spent the last year vilifying Ray Rice and a whole host of other professional athletes (rightfully so) for beating the shit out of women, but then turned around and made the number one movie in America a film about sexual abuse and the manipulation of women?

Really? Not only that but we’ve completely ignored the medias absolute insistence on shoving this film down our throats as if it was Christian Grey’s cock. How does this make sense to anyone? I’m stunned. The same dip shits who are losing their mind over domestic violence are waddling their fat asses into the theater to shovel popcorn in their pie holes and watch a virgin get sodomized by a billionaire sociopath.

Bravo America. The majority complain about terrible products in film, radio and television and about violence in all of the above and then went and generated nearly $82 million dollars for a shitty product with a shitty message depicting sexual abuse and manipulation.

“But Brenden, I was really curious and was excited to see the sex scenes!”

Fine. That’s awesome. But I swear to God I better not see you same people espousing your absolute “disgust and disappointment” the next time a story of domestic violence or sexual abuse is in the news. You’re part of the problem. No, you don’t partake in these activities. Instead, you promote and support them with your dollars, your time and your social media posts.

I’m not letting you off of the hook. You don’t get a pass because you’re too stupid to connect the dots and understand what I’m saying. You’re part of the problem whether you choose to admit it or not. We’re all better than this. YOU are better than this.